Swimming with Sperm Whales in the Azores 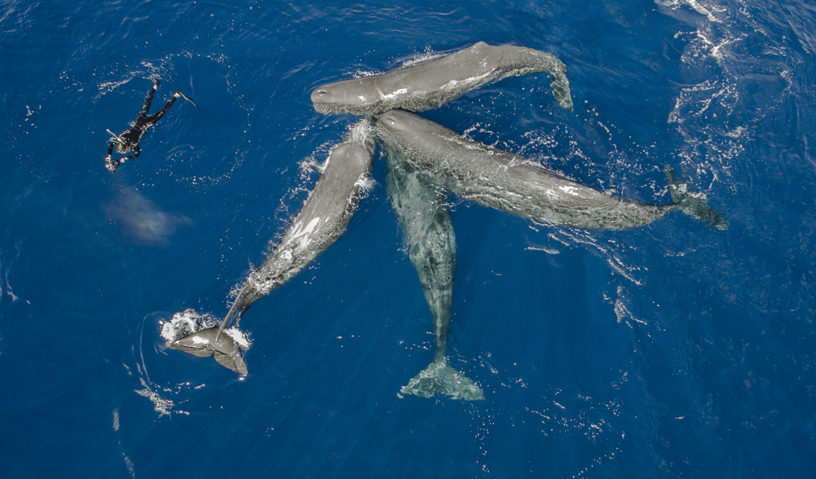 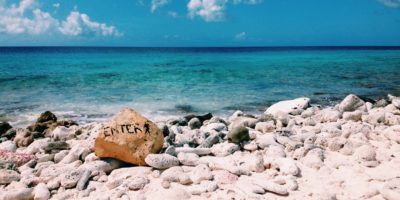 Bonaire: The Easiest Diving in the World?

The air around suddenly vibrated and tingled, as it were, like the air over intensely heated plates of iron. Beneath this atmospheric waving and curling, and partially beneath a thin layer of water, also, the whales were swimming. Seen in advance of all the other indications, the puffs of vapor they spouted, seemed their forerunning couriers and detached flying outriders.
– Herman Melville, “Moby Dick”

We set out in late morning from a small deserted harbor on the north side of São Miguel. A couple of fishermen watch us unload bags of gear – wetsuits, masks, fins, enormous cameras, a drone. Mike takes out a bag of snacks and a thermos full of hot tea out of the trunk – we plan to stay out for many hours. Once we lay everything between the seats on the long RIB, middle-aged captain Rui speeds the boat out into the horizon and along the coast to the East. Laura, a petite, young marine biologist wearing a bandana peers through her binoculars. “This is very, very good weather,” she repeats with satisfaction.

I am holding onto the seat back as the boat bounces along. I thought it was pretty warm in the harbor, but now the air feels cool. I decide to pull on my wetsuit. I had been reading “Moby Dick” for two months prior to this trip, and my excitement is mixed with apprehension. I am no more than a couple of feet away from the water. Is the whale going to try to stave our boat with his massive jaw? Even worse – what if we don’t see any whales?

Whale watching is one of the main tourist attractions in the Azores. Thanks to an abundant supply of squid, their main food, sperm whales reside near the islands year around and can be reliably seen during any season, provided the sea is calm. The trips are conducted on rigid inflatable boats, getting you as near the water as possible. Normally, getting in the water with whales is forbidden in the Azores. However, a professional photographer can apply for a license to do so, and he is allowed assistants on the shoots. I am lucky to have a very talented friend, Mike Korostelev, who obtained such a license.


If, like me, you had decided to educate yourself on sperm whales by delving into Herman Melville’s literary masterpiece, you might experience some nervousness and fear before your first encounter with the living animals. However, in real life sperm whales are more elusive than dangerous. The Azorean tourism ministry takes their whale watching so seriously that it sets watches along the shore that communicate whale locations to boat captains. Before I have a chance to doubt our luck, Laura spots the first animals. When she points, we see the tell-tale misty spouts.

Ohmygod ohmygod ohmygod. What do we do? I try to contain myself. Listen to the captain, do as he says. He kills the engine as we drift quietly. The spouts are nothing like the tall geysers of the humpback. Sperm whales exhale from the front of their fat-filled forehead with a burst of water that looks like a drink sprayed from your mouth at a sudden hilarious joke. Soon I see shiny grey backs gliding along the surface. I hear their loud breath and feel mist on my skin. There are three of them, two females and a juvenile. In the back of my mind I recall, “Of all divers, thou hast dived the deepest. That head upon which the upper sun now gleams, has moved amid this world’s foundations.”

But for Mike and his camera there is no time for awe and contemplation – every second counts. We strap on our masks and slide off the side of the boat. I feel a shiver as the cool water penetrates my suit. I put my face in the water, but before I have a chance to take my first breath, the whales sound to the depths. “Good bye!” says Laura, cheerfully. With the help of Rui, I make the awkward climb back into the boat. I am wet, disappointed, but immensely excited.

It is not long until we see the next group. I sit on the edge of the boat in preparation, as Rui repeats, “Go quietly! Do not splash!” But once again, by the time I am in the water, the whales bid “Tchau” with the flip of the tail. We do this a few more times, racing along the coast from whale to whale. We decide to get into the water one by one to perfect our quiet entry. We eat apples and some energy bars while Laura explains that sperm whales are pregnant for 16 months and care for their young for up to two years, feeding them thick, yogurt-like milk. Females and juveniles form the permanent population in the Azores, while the males take long, seasonal solitary journeys all over the world.

The sun has moved past its zenith when we spot another family – a mom and baby. I put on my mask, grab the snorkel with my teeth and slide off the edge. I am peering into blinding, bottomless indigo blue. As I turn my face in the water the whale comes into view, followed by her calf. I see gray skin, covered with wrinkles and white scars, a disinterested small eye placed far back on the enormous, rectangular, absolutely nonsensical head. The calf is actually three times longer than me, but absent any frame of reference, beside his giant mother he looks small and cute, smiling with his straight, lipless jaw. Slowly I swim towards them, staring for just a few moments, until they point their foreheads downwards and silently disappear into the blue abyss. I am left alone with the sound of my own breathing. 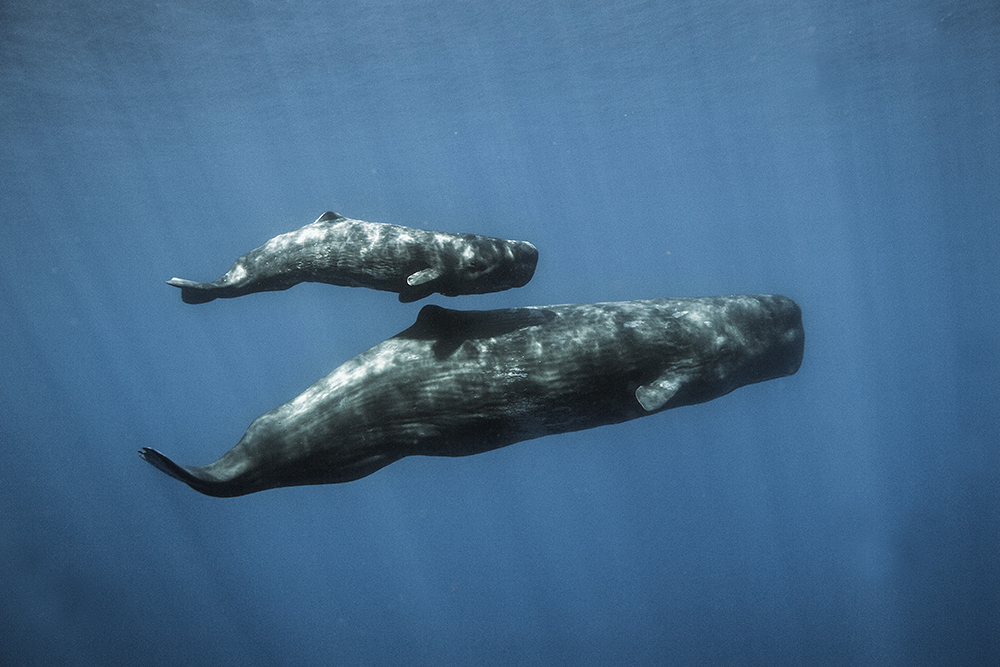 All I want when I clamber back into the boat is to do it again, to see them again. How much time has gone by? How many more chances will I have? We keep going. All three of us get another encounter, and Mike is able to capture a few shots. As the sun turns towards sunset, Rui speeds us back to the harbor. I am cold, tired, and hungry, but meeting whales up close diminishes all of my discomforts. A sense of having been inducted into a mysterious cult overwhelms me. I feel humbled and elevated at the same time, as if I’ve just visited a grand temple. Whale professor and whale prophet, Herman Melville, extolled the sperm whale not only as the most superior whale, or most superior animal, but in fact the most superior being, an incarnation of God himself:

Oh, man! admire and model thyself after the whale! Do thou, too, remain warm among ice. Do thou, too, live in this world without being of it. Be cool at the equator; keep thy blood fluid at the Pole. Like the great dome of St. Peter’s, and like the great whale, retain, O man! in all seasons a temperature of thine own. But how easy and how hopeless to teach these fine things! Of erections, how few are domed like St. Peter’s! of creatures, how few vast as the whale!

It does not require particularly deep thinking to recognize the irony and the timeless symbolism of these words, for as Melville was extolling the whale as worthy of worship, people all over the world were killing hundreds of thousands of sperm whales for fuel. Yes, it seems crazy now, but these magnificent animals were nearly exterminated for candles and lanterns to extend our days. In fact, even the 1956 screen adaptation of “Moby Dick” features real whaling in Madeira, not far from the Azores. And although scenes of bloody, dangerous animal hunts are now rare in modern society, we have come ever further in extending our days, expanding our comforts and destroying our very creator in the process. Unless we make a choice to change course before it is too late, we will all perish together with our ship. It will not be a whale that destroys us but our own arrogance. 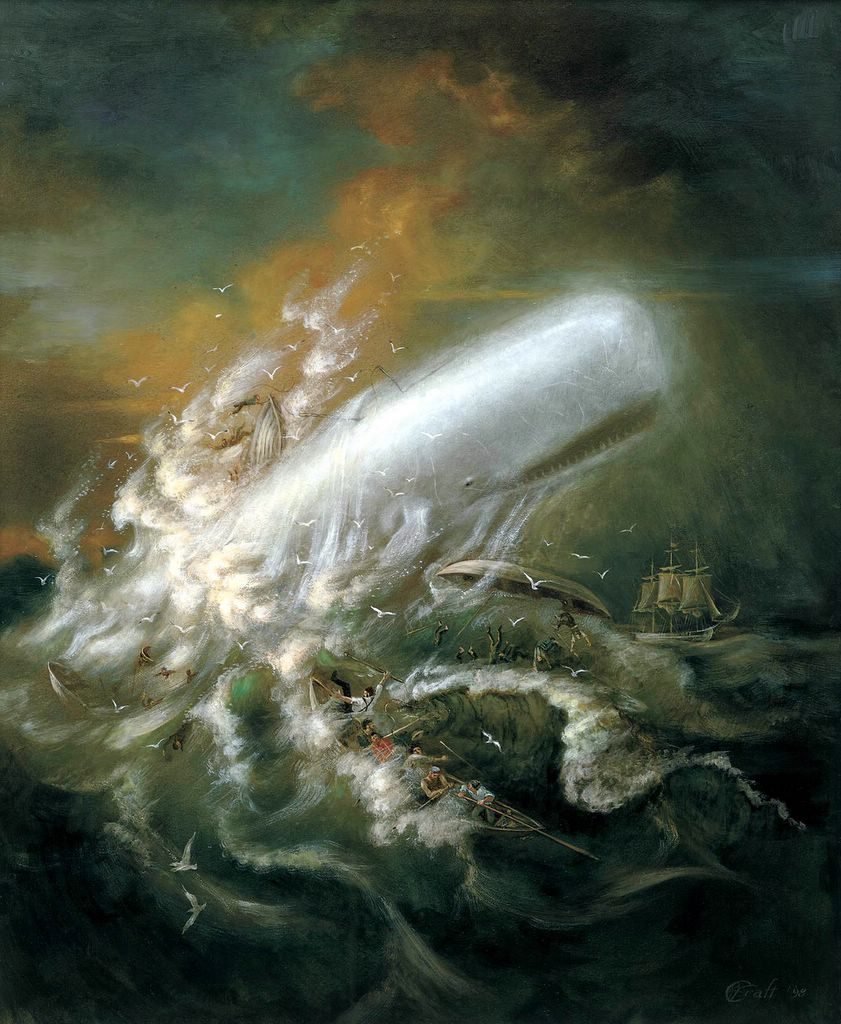 If you are interested in joining Mike and his merry band of wildlife photographers, the best way to find out about his next team adventure is to follow him on Facebook and watch for announcements.

According to the regional legislation swimming with whales and other cetaceans that are not dolphins is forbidden in the Azores. All photos were performed under the authorization n.º 15-ORAC-2016 issued by the Azores Regional Government, on 07-09-2016.

Bonaire: The Easiest Diving in the World?